Switching from sailing to trailing… 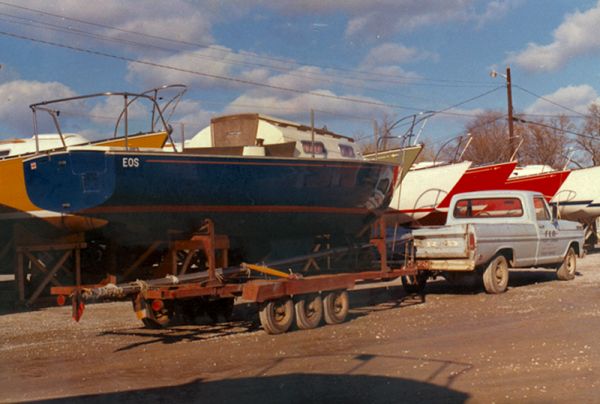 It was October by the time I was ready to go, but that year October had the first snowfall on Lake Erie! I changed my plans and borrowed Curley’s 3 axle Shark delivery trailer, rented a pick-up truck and headed for the Chesapeake at 60mph. I slept one night by the roadside very comfortably in the Shark. I found a friendly marina in Yorktown, VA, left the boat propped up on land and headed back to Detroit with the towing rig. I got back to Yorktown just after Christmas and there was snow everywhere. The marina owner would not hazard the traveling hoist and boat sliding into the water together so I had to wait a week or so, sleeping in the Shark on land. Because it went down to 10 degrees F at night I used my primus stove to heat the boat with all hatches tight shut.  I learned that you can remove a lot of oxygen from inside a tightly shut boat. The Primus started to go out after a while until I cracked a hatch!

I learned that you can remove a lot of oxygen from inside a tightly shut boat. 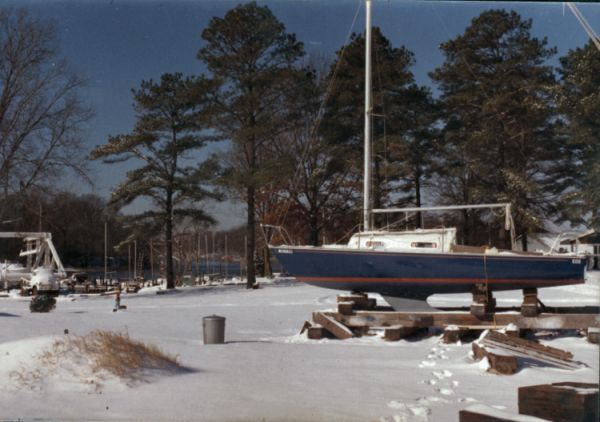 Snowed-in at the marina

Finally in early January I got the boat in the water and sailed down Chesapeake Bay to Norfolk and the Dismal Swamp canal. Just as it was getting dark the boat and I rose in the lock to the canal level to find its fresh water covered in ice a half inch thick as far as I could see. I slept the night with creaking ice around me, Shackleton style, and next morning tried the boat on ice-breaker duties. Except for lumps of ice occasionally catching in the outboard propeller, we motored along fine. I worried that I was slowly cutting off the hull at the waterline but did no damage at all. The ice only lasted a mile or so, anyway. 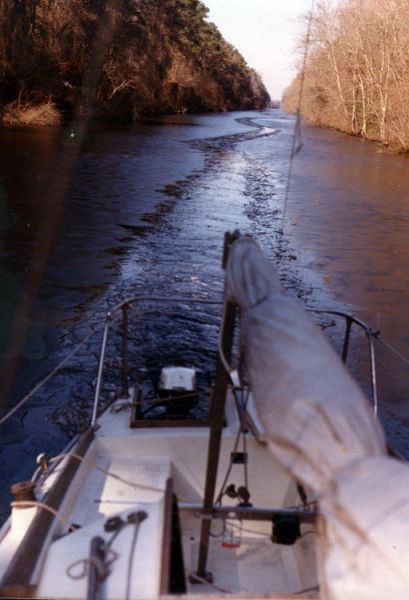 Breaking Ice in the Dismal Swamp

That was the beginning of a pleasant but hurried trip (with Winter just behind) through American coastal history on the Intra-Coastal Waterway. I sailed or motored all the way to Miami, meeting some very nice folks along the way who had come down from Vermont. It turned out that Marcia’s mother had a house on a canal in Coral Gables with an empty dock, and I was invited to use it as a base of operations. A few weeks after arriving in Miami, Peter and Marcia, in their classic old wooden boat, and I in the Shark, crossed over to the Bahamas where we cruised around for a couple of months. I took the opportunity to practice using my new sextant and the self-steering gear and was happy with both.