The Bahamas and Beyond…

I finally decided to sail to England when I returned to Miami after that very pleasant two-month cruise in the Bahamas. It had been in the back of my mind for some time. That cruise had reinforced my confidence in the boat, provided I could keep the water out of it, and experiments with my home-made wind-vane self-steering gear (SSG) had proved successful.
I spent the next two months docked behind the very hospitable home of Harriet Mitchell in Coral Gables, working on waterproofing the boat and improving the SSG. (Work included building a locker/ bridge deck in the cockpit, which was to hold the Avon dinghy and would halve cockpit volume. Waterproofing the lazaret, main and forward hatches, modifying the backstay to clear the SSG vane and become an antenna, building a new, thicker and balanced rudder and rebuilding the SSG units with new internals). Finally by the end of July I was ready to 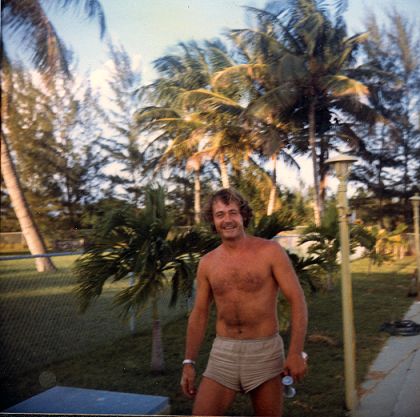 “Working” in the Bahamas

go, a month later than I hoped for and two months later than ideal from the weather point of view. Chances of hurricanes were increasing all the time, and weather at the other end of the trip would get slowly worse as fall progressed.

I loaded up the bilges under the bunks with canned foods and gallon plastic bottles of water (14 gallons), and said au revoir to the red waterline stripe as it sank beneath the water. I spent about $120 on canned food and was given almost that again by my kind hosts. (They gave me a couple of surprise parcels to be opened ‘”somewhere in the North Atlantic”… which turned out to be great morale boosters later on). I had a further 16 gallons of water in loose plastic containers, making 30 gallons in all.

Early on the morning of 1st August, 1973 I headed out across Biscayne Bay and was dismayed by the sluggish way the boat rose to the waves. She felt more like a heavily laden barge than the lively Shark I had got used to. Inside, the bunks were piled with boxes and bags yet to be stowed. Surprisingly I was able to keep 11/2 bunks clear most of the time once I had packed everything away. One advantage I soon discovered of having all that extra weight on board was that it was all stowed low down and made the boat considerably more stiff in a blow. As I set out, my feelings were a mixture of apprehension at the unknown, as well as relief to be finally under way. I was also already looking forward to arriving in Bermuda!

The next eight days provided near perfect sailing (through the Devil’s Triangle!). With a steady S.E. breeze on the starboard beam I covered 142, 132 and 140 miles in the first three days, the self-steering being in charge all the time, blue skies and sunshine by day, and cool nights. After the first night, when I rounded the Bahamas and headed N.E, I slept well at night. I found it disconcerting at first to wake from a stationary dream and find oneself traveling at 6 knots with no look-out ahead. I had a home-made mast-head radar reflector and relied on that. On this section of the trip I had my first experience of the fellowship of the sea. The “Ore Jupiter,” a freighter of about 10,000 tons, turned a full circle to come back and check that I was all right—very reassuring.

This was my first serious navigation. While I played around in the Bahamas I found that with relatively smooth seas repeatable sun sights were easy to take, and with daily practice, working out became quicker and quicker. I took a morning sight to establish longitude and a noon sight for latitude. Although I didn’t bother to check my accuracy with star sights, the free wind enabled me to stay within 20 miles or so of the rhumb line all the way to Argos Island just south of Bermuda. The whole 900+ miles was on starboard tack, which ensured that the cans in the starboard bilge did not get rusty in spite of an occasional leak from my modified fore-stay deck fitting. The slowest day’s run covered 80 miles. As I approached Bermuda I had to harden up to keep my course until the boat was almost close-hauled. Like this she would jump off waves and land with a crash so at night I would ease sheets and head off slightly to got some peace. The Argus Island light appeared when and where it should have, and on the 9th August I coasted along the south shore of Bermuda with the sun shining feeling pretty good as I ate a large breakfast. If I could sail like this I would be in England by the middle of September.

As I entered the Narrows leading into the harbour of St. George’s, a large cruise ship was leaving. I tied up at Ordnance Island in downtown St. George’s and set about inspecting the boat and gear for troubles. I couldn’t find anything wrong, and the bottom was still clean so I tried to seal the fore-stay fitting and finish my ‘hurricane proofing’. I fitted nets inside to catch loose articles from shelves; screws to hold down the under-bunk hatch covers and provided tie-downs for everything that was loose and couldn’t be wedged in somewhere. I wanted to provide for a capsize without the gear and ballast falling about inside. 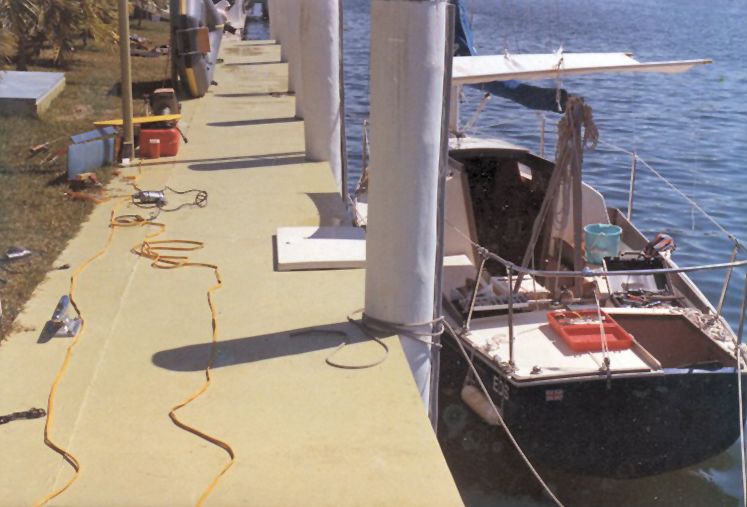 Before leaving I wished to see something of Bermuda, so I took a bus ride down to Hamilton, the capital, at the other end of the island. Bermuda is a series of islands joined together by bridges, and blue water is always to be seen somewhere. Every square inch seems to have a house on it except for two or three rugby-pitch sized cultivated patches. Everybody was very friendly—black and white— to me, if not apparently to each other. I saw among the older whites social customs and dress that belonged to an England of 50 years ago. While there I met an American who had taken 65 days to get to Bermuda from England, having started in June, and had light head-winds all the way. He gave me a pile of paperbacks in case I had the same problem.

About to set sail for UK

Early on 13th August I topped up my water supply and left St George’s with 2,000 miles to go to England. As I was going out of the Narrows, the same cruise ship was coming in— in four days it had been to New York and back!