Sailing toward the sunrise

A stiff S.W. wind had been blowing for a couple of days, and as I ran N.E. and left the shelter of the island the following seas increased. I wished to get as far as I could with the favorable wind so I got the spinnaker up and steered by hand until nightfall, and then left the SSG to steer with only the jib up. I found that in big following seas the boat tended to yaw under SSG. Waves coming up behind were higher than my wind-vane and produced a cross-wind along the wave troughs which only made the yawing worse. I could only get a straight course by limiting the rudder swing with a tiller rope to 10 degrees either way. She seemed happier when self-steering under foresail alone, but unless making at least 5 knots, got moved around a lot by overtaking waves.

I was reading Two years Before the Mast and began to suspect I would be in a position to write the sequel.

The first day’s run was 120 miles but then for 5 days the wind was light and variable. The sea took a while to die down  – and there is nothing more uncomfortable than a light sailboat with no wind in a residual sea. This was ‘the doldrums’ both geographically and mentally. I was reading Two years Before the Mast and began to suspect I would be in a position to write the sequel. One day I drifted 8 miles backwards towards Bermuda. I was glad of the paperbacks and frustrated to be consuming supplies and drinking water and not getting anywhere. The one good thing was that the slight queasiness I felt at times on the first day out of Bermuda went away as I got used to being at sea again. 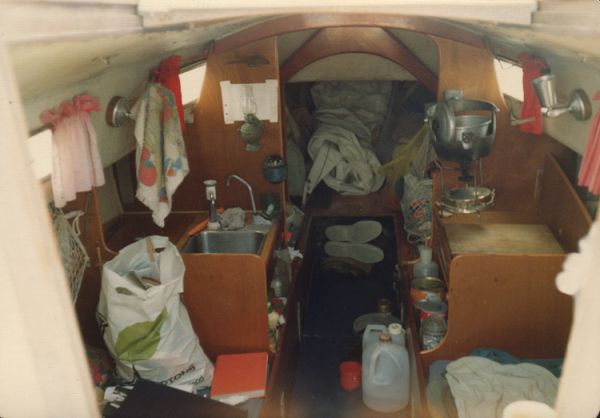 Sunday 19th August finally produced some wind and I was able to sail again. It was the first and only time that I could sail all night with spinnaker up on self-steering while I slept —with calm seas the SSG was not overworked. By the next night the wind had increased with gusts of up to probably 30 knots, and I decided to try lying a-hull — that is with sail down and tiller tied to leeward and the boat lying beam-on to the waves. She rode the waves well, and it was comfortable below, so I was relieved to think I could ride out gales this way. 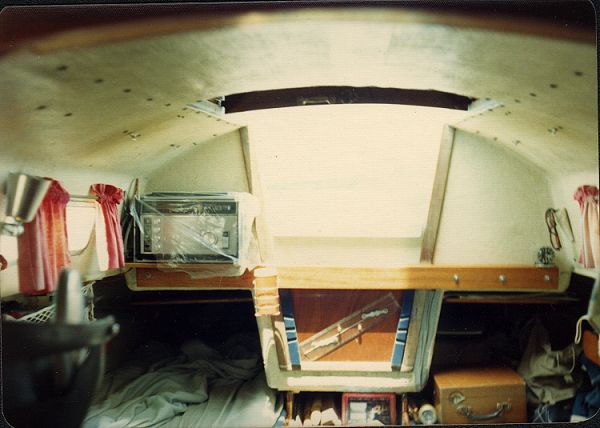 For the next few days I made good progress until the evening of the 23rd August. I was dozing in the cabin when the boat started to wander about. I dashed out to see what was wrong, and found that the rudder brackets had broken off, leaving the rudder attached only by the tiller line and the steering gear hoses of the hydraulic self-steering. As it was rapidly getting dark I lowered main and jib and brought everything, including the rudder, into the cabin for the night. The wind and sea were coming up again but the boat lay comfortably a-hull even without a rudder — occasionally a breaking wave hitting the quarter would turn us right around (turn the other cheek!). Next day was too rough to work, so I stayed in bed most of the day — the only place where I didn’t mind the motion. The following day I put up the main, reefed and sheeted down hard amidships to reduce the rolling, and started turning my Brydon Boy Danforth-style anchor into brackets for the rudder. This involved a lot of unpleasant sawing and took all day. The next day was again too rough, but on the following day I started hand-drilling 1/4 inch holes in the 3/16 steel plate cut from the anchor. That was a nasty job too, as I had between 20 and 30 holes to drill. Hell for me will probably be making rudder brackets out of anchors in a rolling boat at 85o F. with inadequate hand tools. I realized that the pintle break was my fault. I had doubled the rudder loads with my balanced rudder and added some badly welded  reinforcements to the factory pintle straps to precipitate the failure.

The next day I assembled everything — it was certainly stronger than the original. At this point I was bitten by a fish. I was using a wrench to tighten bolts just under the water when a fish, not more than 15 inches in length, came close, apparently curious, but in fact hungry. It bit my first finger joint and drew blood — I dropped the wrench into 2000ft of water. When it showed signs of coming back for a second helping, I tapped it lightly on the head a couple of times with a small hammer and it became more timid.